The REAL father of the men's rights movement 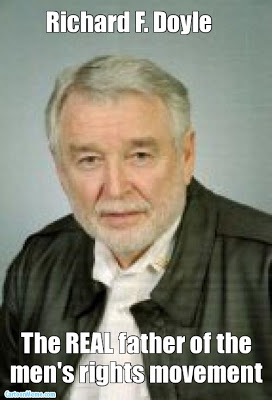 Let's get one thing straight: Richard F. Doyle is the FOUNDER of the men's rights movement. A lot of MRA's have never heard of him which is a shame. The following is from Doyle's website Men's Defense Association:

Richard F. Doyle was born December 3, l930 in Rosemount, Minnesota. He attended St. John’s Prep. school, Collegeville, Minnesota; White Bear High School, White Bear Lake, Minnesota; and St. Thomas College, in St. Paul, Minnesota. Heavily into athletics as a youth, Doyle served four years with the U.S. Air Force during the Korean War and three years with the Marine Corps Reserve, including a stint at officer training school in Quantico, Virginia. He was an air traffic controller for l7 years and an active commercial pilot and flight instructor for 3 years. He coached two U.S. Tug of War teams at the 1986 World Tournament in The Netherlands.

Divorced in l957, and now happily re-married, Doyle was shocked by the anti-male prejudice pervasive throughout the court system. He formed the Men’s Rights Association (now Men’s Defense Association ) in l972 and Men’s Equality Now (M.E.N.) International , an international coalition of similar organizations, in l977. He became an author and lecturer on gender issues, especially divorce. His best known work is The Rape of The Male (Poor Richard’s Press, l976. Now out of print). He has appeared on national TV shows, as well as many local TV and radio programs throughout the country. From 1972 until 2004 he edited and published The Liberator, première monthly newsmagazine of the legitimate men’s/fathers’ movement with international circulation. A brief biography of Doyle can be found on the Wikipedia website.

George Santayana said "Those who cannot remember the past are condemned to repeat it" (plus ca change, plus c'est la meme chose). Anyone serious about the men’s/fathers’ movement and means of assisting it should become familiar with its past. Hence, this section.

Organized attempts at improving the status of men have developed over the years, differing according to various perceptions of the problems. In America, this began in the 1800s with small groups scattered about. The National Sociological League was perhaps the earliest large organization. In 1931 its Executive Director, Dr. Alexander Dallek, claimed 25,000 members, from every state in the union. They attacked shotgun marriages and unreasonable child support. In 1932 an organization called The Family Protection League lobbied state legislatures. No details of its demise are recorded.

With the exception of founders of USDR, no others in the Fathers movement could rival Charlie Metz intellectually until Professor Amneus came on the scene in the late 1970s. Charlie was the practical expert, Amneus the theoretician. Today’s leaders have forgotten, actually few ever knew, whose shoulders they’re standing upon.

Samuel Adams said “It does not take a majority to prevail ... but rather an irate, tireless minority, keen on setting brushfires of freedom in the minds of men.” Margaret Mead said “Never doubt that a small group of thoughtful committed citizens can change the world; indeed it’s the only thing that ever has.” Reformers need more of what Tom Wolfe called “The Brotherhood of the Right Stuff,” men with cajones.

These are the roots upon which the movement is based. Unity eluded the earlier groups it must be embraced by us if we are to succeed. Petty differences are just that,petty. They can be overlooked for the greater good and for the greater good they must be overlooked. If you insist upon magnifying atrocities then magnify the feminist's atrocities. Infighting accomplishes nothing. Meanwhile a unified assault upon the enemy will accomplish a lot. Never forget that.
Posted by Masculist Man at 11:12 PM

Thanks for posting this valuable piece of history. And thanks for emphasizing unity.

You might find this Doyle-related image (regrettably of low quality) to be of interest:

PHOTO CAPTION: Founder Norman Kopp of the Deprived and Discriminated Against Males of Central New York carries the organization's message by picketing.

I was dragged through the divorce courts in 1989 to 1991.... Doyle helped me COPE! Thank You Richard! You helped me keep my sanity!
Bernie Schmidt, Oakdale MN 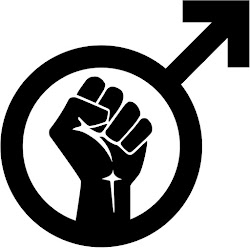 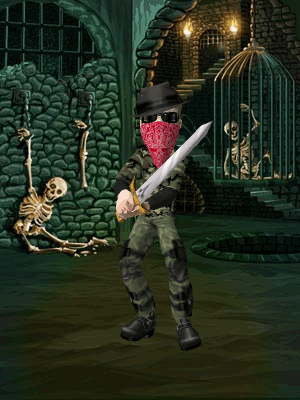 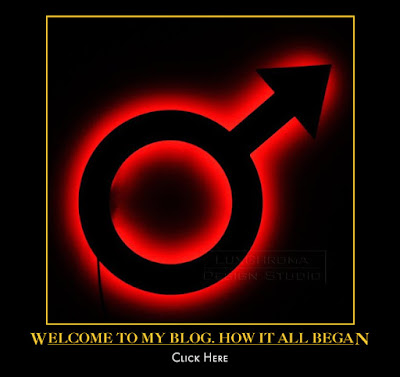